Mr. R.D. Singh started his career as a teacher in 1957, under the legendary Jack Gibson at Mayo College, Ajmer, moving on to become house master of Doon School in Dehradun. Later, he was selected by the Ministry of External Affairs to head a school opened by the King of Bhutan under the Colombo Plan.

During his tenure he was involved in drawing the education policy of Bhutan under UNESCO. After his retirement, he was invited by the royal family of Jaipur to represent the City Palace during visits of various dignitaries, including Prince Charles and President Clinton.

"Sarvottam International School aims is to fuse the strong cultural fundamentals of Indian society with advanced learning tools acquired from the world over giving education an exciting and dynamic direction.It has been their constant endeavour to create an ambience where education does not end at learning facts. Teaching and learning go beyond the four walls of the classroom. The Smart Classes are equipped with the Interactive White Boards and Internet and in this way, the children have the opportunity to learn from the latest advancements in various subjects. The school is also striving hard to train the children who learn to discipline their feelings, restrain their passion and inculcate pure morality under all circumstances." 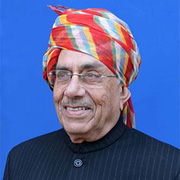